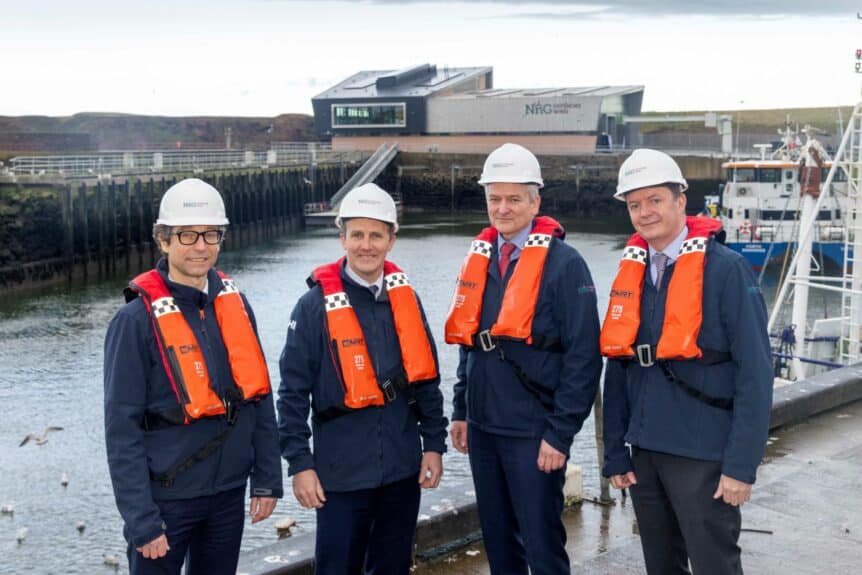 The development of the Neart na Gaoithe (NnG) offshore wind farm has achieved a significant milestone today (Wednesday 25 January 2023) with the opening of its state-of-the-art Operations and Maintenance (O&M) base in Eyemouth, Berwickshire.

The official opening ceremony was conducted by Michael Matheson, Net Zero & Energy Secretary, said: “The Scottish Government’s draft Energy Strategy, published earlier this month, sets out our vision to ramp up renewables production and secure a bright future for our energy sector. We have a massive potential pipeline of offshore wind here in Scotland, and it is essential that our supply chain benefits from the associated opportunities that come with this.

“As well as standing ready to provide state-of-the-art facilities for the Neart na Gaoithe project, this new operations and maintenance base in Eyemouth is a prime example of how new offshore installations can create and sustain good green jobs and also bring wider, long-lasting benefits to the local community, businesses and economy.”

The O&M base will bring up to 50 high quality jobs to Eyemouth Harbour for the 25-year lifespan of the wind farm.

The NnG O&M base includes a 1,040 square metre, three storey operations and maintenance building, alongside a 538 square metre storage warehouse. The base houses a high-tech control room with staff from NNG and its subcontractor Siemens Gamesa from which the operation of the 450 megawatt (MW) wind farm will be monitored when it is commissioned in 2024. It will monitor its low carbon electricity output, wind speed, turbine performance and all radio communications. The control room team will also monitor and control the movement of wind farm vessels into and out of Eyemouth Harbour and the site of the wind farm itself, which is located 15.5 kilometres off the coast of Fife.

The building also houses staff welfare facilities, collaborative workspaces, changing rooms, drying rooms, locker rooms and briefing areas for the team of technicians based there, with training, retraining and apprenticeship opportunities available to the residents of Eyemouth and the surrounding area.

It is also large enough to handle the increase in staffing levels in the summer months when wind farm maintenance will increase due to calmer weather and lower wind speeds. This uptick in staffing is expected to bring additional economic benefit to the surrounding area.

Seven technicians from the area have already been recruited and will begin work in February.

The O&M base was sensitively designed to fit in with its surroundings at Eyemouth Harbour by Corstorphine + Wright architects and built by Fife-based Muir Construction. The land on which it is located is leased from Eyemouth Harbour Trust with the revenues from the lease supporting further investment by the Trust in the harbour itself, which is a working fishing port.

Alongside the O&M base, a high-quality berthing pontoon has been designed, constructed and installed in the harbour basin on the marine side of the harbour by Moray-based Inland and Coastal Marina Systems.

NnG, which is owned by EDF Renewables UK and ESB, will supply enough low carbon electricity for around 375,000* homes and has a capacity of around 450MW of low carbon energy. It will offset over 400,000 tonnes of CO2 emissions each year. The project will be fully operational in 2024.

Matthieu Hue, CEO of EDF Renewables UK said: “The new base is a great example of our commitment to investing in Scotland. We’ve used local and Scottish companies during its construction phase and there will be high quality jobs and strong economic benefits for the 25 year lifespan of the wind farm. We already have 10 onshore wind farms in Scotland and our large development pipeline will allow us to expand our contribution to delivering more low carbon and affordable renewables capacity.”

John O’Connor, Generation Delivery at ESB, said: “The Neart na Gaoithe project is an important part of ESB’s ambition and commitment to building a low carbon generation portfolio of scale. The opening of the Operations and Maintenance (O&M) base on site is a significant milestone in this project as we work together to bring clean renewable power to the people of Scotland and help the country achieve its climate targets.”

Matthias Haag, NnG Project Director, said: “I’m immensely proud of the facility that we’ve built here, which is one of the most advanced O&M bases of any wind farm in the world. It will ensure not only that the NnG wind farm runs efficiently but that we put the safety and welfare of our people front and centre as they look after the operations of the NNG wind farm.”